The idea of a National Hockey League game in Seattle is still just that: an idea.

NHL Commissioner Gary Bettman issued a bit of a non-update update on expansion during the Board of Governors meeting Wednesday. The short version: still evaluating the application, still hope play begins in September of 2020, but it all depends on if KeyArena is done.

(Side note: Tod Leiweke said during a conference on Tuesday that NHL Seattle believes the city will sign off on all the KeyArena paperwork come September, when the Board of Governors’ next scheduled meeting is. That’s also the earliest Bettman has said the league would vote on Seattle expansion.)

Obviously a lot has to happen between now and the inaugural puck drop in Western Washington (most importantly: securing the franchise). But the ownership group leading the charge is already making major hires — some publicly, others privately.

Tod Leiweke was the first big name that David Bonderman, Jerry Bruckheimer, and Tod’s brother Tim Leiweke brought into the fold. He already is not alone.

The NHL Seattle group hired Dave Tippett as a senior advisor Monday. Tippett’s hiring, which was first reported by The Seattle Times, is a major one that will help shape the overall structure of power for the (still theoretical) franchise.

But Tippett is not the only new addition to the team hoping to bring another NHL team to the Pacific Northwest.

Tod Leiweke quietly brought in his long-time “right hand man” as well. Even though his name may not jump off the page, Seattle sports fans are already familiar with his work.

A spokesperson for NHL Seattle confirmed my suspicion that John Rizzardini was hired on to help the Seattle Hockey Partners, and one of his biggest projects so far is already (mostly) complete. 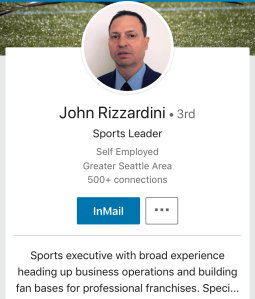 Rizzardini started with the group before the season ticket deposit campaign, and then led that drive from December 2017 – March 2018. Obviously that was a resounding success.

NHL Seattle surpassed its goal of 10,000 deposits in the first 720 seconds. They sold 33,000 deposits in 31 hours before closing it down and starting a waiting list. Remember: the renovated KeyArena is supposed to hold 17-18,000 for hockey.

Tim Leiweke told TSN at the time he was “shell shocked.” Bettman called it “an amazing expression of interest.” It was the work of Rizzardini, who likely will circle back and head the mission of turning those $500 or $1,000 deposits into full or partial season ticket purchases (assuming the league green-lights the Emerald City expansion).

In the meantime Rizzardini is working on marketing and other “organizational/team-building efforts.” That’s not surprising because those fields and ticket sales are his backgrounds, and everywhere he’s gone — there’s been a very noticeable bump.

But while looking through Rizzardini’s past, you notice another trend: a history of he and Tod Leiweke working together to help turn franchises around quickly. Former coworkers like Dave Doroghy say the dynamic duo were attached at the hip.

On the hiring side, Tod had a colleague that he brought along with him wherever he went. With every new team, when Tod was brought in to expedite significant change, he wanted someone he could trust by his side—John Rizzardini was his guy. John was another American who had worked alongside Tod at the NBA Golden State Warriors and other teams. He must have delivered, because Tod brought him to Vancouver to be the new [Vice President of Ticket Sales]. Later, after the two of them summited the ticket sales mountain up here in Canada and went back down to the USA, John rejoined Tod at the Seattle Seahawks where Tod would also become president. They worked together for 12 years, and I am sure when Tod wanted to speak to “Rizz,” as he was nicknamed, it wasn’t in increments of three, but was in increments of 30 things he needed, and quickly.

Let’s run through their various overlaps, shall we?.

4. Minnesota Wild (Both worked in Minnesota, but at different times):

What should be clear from the above resumes is that Leiweke and Rizzardini are a power pairing. Wherever they have gone, ticket sales and the fan experience have boomed shortly thereafter.

As I mentioned earlier: “Rizz” is working on marketing and organizational/team building right now for NHL Seattle.

Based on his experience, I would not be surprised if he also oversaw operations in some form or fashion (speculating: possibly as a Chief Operating Officer?) The bottom line: Rizzardini’s work will be something all fans will ‘see’ at games and before them — whether they realize it or not.

Believe it or not — there’s one more overlap between the Leiwekes and Rizzardini: Los Angeles, which also ties them to NHL Seattle’s newest public addition.

This was the hire that received a lot of attention, and for good reason.

Tippett is a Jack Adams Award-winner as the NHL’s Coach of the Year. As the boss behind the bench, Tippett helped lead both the Dallas Stars and Phoenix/Arizona Coyotes to the Western Conference Finals.

But the Saskatchewan-native got his first NHL job on the coaching side of things in LA. He was an assistant coach with the Kings from 1999-2002, before Dallas hired him to be head coach of the Stars.

Tod Leiweke’s brother Tim was President of the Kings from 1996-2001, and then he was named President & CEO of AEG — the parent company that oversaw the Kings, Staples Center and the LA Galaxy. Tim Leiweke held that position until 2013.

During Leiweke’s time in LA, Rizzardini was the Executive VP of Ticket Sales and Marketing for AEG from 1999-2000.

As we’ve learned through various interviews with Tippett in the last few days, Tim Leiweke was the first to reach out to him about the idea of helping to lay the groundwork for a Seattle franchise.

While Tippett is currently a “senior advisor,” he’ll be doing tasks that could reasonably fall under one of his titles during his final year in Phoenix: Executive VP of Hockey Operations.

Tippett told several people, including Stephen Whyno of the Associated Press, that he’s helping with the renovations to KeyArena, work on a possible practice facility, lining up an affiliate in the American Hockey League, and helping shape the front office.

“You’re always trying to find new challenges in life. … I’ve been fortunate to be a player a long time, I was a coach and manager in the minors and head coach a long time in the NHL. Challenges are exciting. Everybody wants that in their life to do something different sometimes, and this is one of those times for me. …

“I’m not going to rule anything out, but right now this is intriguing to me. Very few people get an opportunity to be involved with a group to start a team from the ground up and when that opportunity kind of got put in front of me, it was very exciting. So I’m looking forward to trying to build something that could be a great franchise.”

That “not going to rule anything out” part, plus Tippett’s past success, further opens the door to the speculation that Tippett might become the first head coach in Seattle.

Tippett made the playoffs eight times in his first nine seasons as a head coach. During that same window, his teams won 55% of their games and averaged 101 standings points per season.

Tippett accomplished all of that with both Phoenix and Dallas, when they were clashing with (you guessed it!) the Pacific Division rival Los Angeles Kings.

But Tippett and the Coyotes were never the same after losing in the 2011-2012 Western Conference Final.

The next year was the lockout-shortened 2012-13 season. From then on, Tippett and the ‘Yotes won just 39% of their games. They didn’t make the playoffs in that five-year stretch, and had two winning seasons — one of which was during the abbreviated lockout year.

Despite the rough seasons, his players still respect Tippett to this day. Here’s what long-time Coyotes winger Shane Doan told Brock Huard and Mike Salk on 710 ESPN Seattle about his coach of eight years.

“He has the disposition of kind of being solemn and quiet and very reserved, and yet he’s got a great sense of humor and he loves to have fun with the guys.”

That view of Tippett was also held by the organization, which signed the coach to a five-year contract extension in May of 2016. However he and the Coyotes parted ways 13 months later.

With all of that in mind, Ian Furness of Sports Radio 950 KJR asked Tippett whether he was brought in to be the coach on opening night in Seattle.

“That’s not what I came here to do but, in talking to Tod, we left the door open. We’ll see what happens as it goes along. Right now I’m more intrigued with the building of the organization than the coaching of the organization. But you never know. We’ll cross that bridge when it comes. I coached a long time, I enjoy the coaching end of it, but you’re always looking for new challenges in life too.”

Two things are clear: 1) He’d be open to coaching the team, but 2) He’s enjoying the new hurdles presented by front office work.

But while Tippett has not closed the door on coaching a Seattle team, I doubt this leadership group names or hires a head coach before they have a General Manager in place. Tippett told Furness he’s not going to be the GM. Whoever gets hired for that job will want a say in the coaching decision.

That’s also why I don’t believe NHL Seattle would hire someone like Stanley Cup-winning coach-without-a-contract Barry Trotz, even though he apparently flew into Seattle Tuesday (plunging local hockey fans into ‘College Football Plane Tracking Season.’) But Trotz reportedly spends his summers in B.C., and Seattle is a popular connecting spot to fly into Kelowna.

(Update: The New York Islanders hired Trotz as their head coach, and reportedly signed him to a five year contract worth $4 million per season)

Per source, Barry Trotz has landed in Seattle. pic.twitter.com/BgyZi6cMZG

As for who will become the team’s General Manager and head coach?

There’s nothing close to official or enough “smoke” around anyone yet. But it’s worth pointing out two other Kings connections — since both could, theoretically, still be available for each job.

2. Dan Bylsma: Remember that whole 1999-2000 LA Kings connection we talked about earlier with Rizzardini, Leiweke and Tippett? You know who played 64 games as a right winger on that squad? None other than “Disco Dan.”

Both Bylsma and Lombardi are just me spitballing here. But they have the connections to the current Seattle Hockey Partners leadership group, they’ve both won championships, and neither one is truly in a position where we can rule out their eligibility should the Leiwekes come calling.

Again: they’re just food for thought, and a couple names to keep in mind in the two-plus years ahead.

For deeper dive into possible GM and coaching candidates: stay tuned. More to come on both fronts soon.

Want to start looking ahead to a Seattle expansion draft? Then check out my in-depth breakdown of the nuanced rules a Seattle GM will have to deal with to pick players from other teams.

As always: If you have any questions or feedback, send me an email at the address on the bottom of the page or hit me up on Twitter (@ScottMalone91).